What have you found, or learnt, or watched, or heard? What are you building or breaking or repairing or investigating?

Let’s hear about your technical adventures, however large or small.

I did just a tiny bit of programming yesterday, related to a challenge
Factorising to give prime factors

The challenge - to write a program which factorises numbers - was in the context of a child needing to do it as a maths project at school. So I thought a very clean and clear solution would be good, rather than something optimised.

But then again, this is what I came up with, which is not terribly clean or clear. But it’s certainly not optimised! It does very poorly trying to factorise large primes. This second attempt is less clear, I think.

Writing a couple of dozen lines of BASIC seems to be my limit at present.

Found/ neither you or Al around on the 25th September

Heard/ that LED tubes are way cheaper to run then ‘fluourescent’ tubes, (does anyone know if the Welsh Mill Hub uses LED tubes?).

By the way, I’m considering signing up to https://neeva.com

Found/ neither you or Al around on the 25th September

Indeed, most regrettably we were enjoying a short holiday in Dublin and the Wicklow mountains. We had to make a choice!

I’m considering signing up to Neeva

Interesting - a subscription-funded search engine, with their own “Knowledge Graph” - but we can’t see how good it is without signing up! I notice there’s also Brave which apparently also lets you set up your own filters. And an engine called Searx which you can run on your own machine - and there are a few public instances too, like this one. (A fair few people use Ecosia for search, its feature is that it plants trees, but also it looks like it has sensible privacy policy.)

Yes, I would expect LEDs to be cheaper to run - and the Remakery is now LED lit.

The Sun is enormous! No doubt. Good thing it’s so far away - but not too far away. Not too long ago I compiled a list of remarkable Sun-related facts:

The Sun holds 99.8% of the mass in the solar system

The Sun has the volume of over a million Earths

The predicted neutrino arrival rate at the Earth depends approximately upon the 25th power of the central temperature of the Sun.

E=mc², and c is very large. The Sun annihilates 4 million tonnes a second to produce its power.

The Sun produces less heat per unit volume - even in the core - than a compost pile. Or a human.

If the Sun were made of bananas, it would be just as hot (for some millions of years, but not billions)

The surface of the Sun is at about twice the temperature of the filament of an incandescent bulb.

The Sun’s corona is at a much higher temperature than the surface.

The Sun looks yellow because the sky looks blue.

Thompson, later Lord Kelvin, argued strongly that the Sun produced heat by gravitational shrinkage (like a banana) which had Darwin declare “Thompson’s views on the recent age of the world have been for some time one of my sorest troubles.” Darwin removed all timescales from the final editions of Origin of Species.

A couple of findings in the form of videos - first off, a home made laser powered by a hand-cranked static electricity generator: And nearby, in some sense, from 1861 in the very early days of photography, we have 3D scanning applied to sculpture portraits: 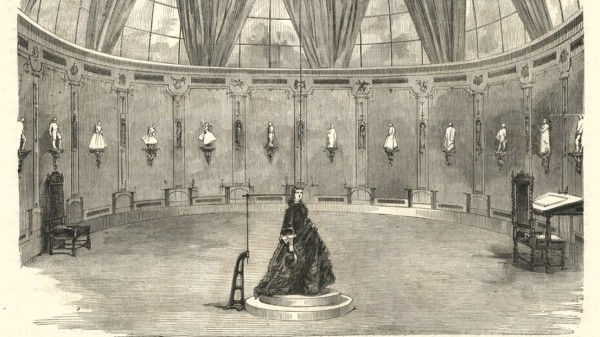 In A Way, 3D Scanning Is Over A Century Old

In France during the mid-to-late 1800s, one could go into François Willème’s studio, sit for a photo session consisting of 24 cameras arranged in a circle around the subject, and in a matter …

I have made some hydroelectricity from the River Frome! Not a lot at this stage. I have 3D printed a scale model of a Poncelet wheel. They can supposedly produce around 70% efficiency. Compared to a simple undershot wheel which would give 30%.

Splendid! Had to look that up, of course:

(I was surprised to see an Archimedes screw (on the Thames) in Mortimer And Whitehouse Gone Fishing the other day - wouldn’t have guessed that to be efficient, but it turns out it can be. Perhaps you need more of a head of water though.)

The main selling point of the Archimedes screw is that it is fish friendly. However I have heard a contrary opinion. I would have a screen to keep larger fish out. The tiny fish would probably go through without problem. A screen is needed anyway to keep branches and twigs out. I have read a paper which has measured an Archimedes screw under various conditions (slope angle and RPM). The RPM at which the efficiency is peak is quite different to the RPM at maximum power. At the maximum power RPM the efficiency drops below 50%. I have made the blades on my wheel curve back more than in the diagram. The aim is to transfer as much as possible of the momentum of the moving water as possible, As is the case with a Pelton wheel. With the Pelton wheel the water jet is turned through nearly 180 degrees, and so transfers nearly all of its momentum to the wheel. They do need a high head of water though and not suited to this low head high flow application in the River Frome. https://www.researchgate.net/publication/307568262_Performance_of_three-bladed_Archimedes_screw_turbine

Interesting difference between max power and max efficiency - I suppose what matters is what’s the limiting factor. A pumped hydro station for example must surely need to get maximum efficiency… or maybe sometimes what’s needed even there is maximum power.

As a non-technical update, Al and I have both had a bout of the plague, but we’re pretty much over it now.

My prime factorisation effects have stumbled forwards, held back a little by brain fog. In a collaboration series of incremental improvements, it now benchmarks at just on 5 seconds, whereas the second version clocked in at a tad under 20 seconds. It has become quite involved and unattractive though, as a program, and unlike my first effort, is full of encoded information about primes.

Just seen this capturing of the (partial) solar eclipse with single-pixel resolution, using a Raspberry Pi Pico and a light-dependent-resistor. By Peter Mount, reported here. 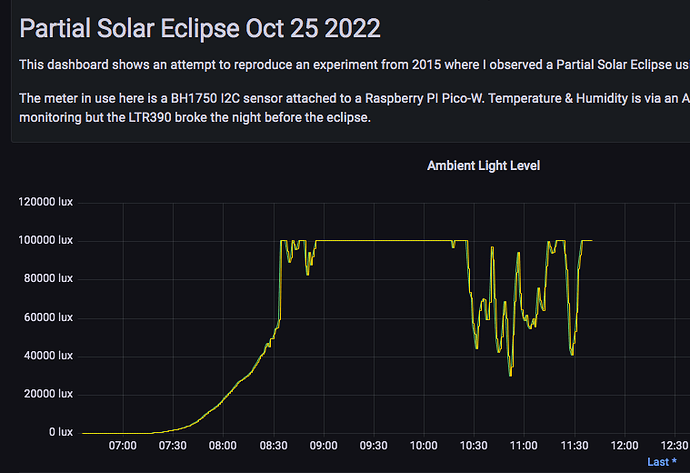 In my quest for a fish friendly turbine using readily available materials, I have come to realise that cavitation / venting of the blades is an important point to be addressed. Deliberately cavitating / venting the flow in a controlled manner is something that researchers in India are investigating. This video has a graphic right at the end, but is not all that informative.: Ventilation Augmented Supercavitating Turbine(VAST) for next generation hydro-power - YouTube
They are using an inappropriate foil anyway, so I assume these are academics rather than engineers!
Question: has anybody used a free/inexpensive CFD application that can accurately simulate cavitation? The free ones appear not to be fully up to the task, and I don’t want to spend £thousands on a good one. The aim is not just to visualise the flow but for it to calculate L/D ratios as a function of AOA.

Question: has anybody used a free/inexpensive CFD application that can accurately simulate cavitation?

(Sorry, not me. I suppose you found OpenFOAM and it’s not up to it? This forum post suggests there’s a world of solvers to be plugged in. This paper mentions four cavitation models.)

I will get back into OpenFOAM. I did find it a bit of faff last time I tried it though. Ideally there would be something as simple and easy to use as XFLR5, which gives a rapid iteration cycle, and plots L/D versus alpha. But I don’t think it has any concept of cavitation. It is intended for low Reynolds number aerofoils.