Some notes from a spotlight talk for Frome tech shed. (This post a bit of a work in progress - I’ll be adding links and images shortly.)

We’ll consider arithmetic, and storage, and then computation more generally

Part 1: Parallelism in the mechanical age

1830’s Babbage’s Anticipating Carriage - never built, but not forgotten. A mechanism to propagate an impeding carry across several digits in one movement, speeding up addition. Here’s an animated 3D model, to explain, by Sydney Padua: 1930’s Zuse’s Z3, 1940’s Z4
First mechanical, and then electro-mechanical using relays. Konrad Zuse was a pioneer eventually starting a computer company. Both Z3 and Z4 serial machines… according to Wikipedia. But maybe not entirely, judging by comments in his autobiography (The Computer: My Life).

The Z3 was a German electromechanical computer designed by Konrad Zuse in 1935, and completed in 1941. It was the world's first working programmable, fully automatic digital computer. The Z3 was built with 2,600 relays, implementing a 22-bit word length that operated at a clock frequency of about 5–10 Hz. Program code was stored on punched film. Initial values were entered manually.:32–37 The Z3 was completed in Berlin in 1941. It was not considered vital, so it was never put into everyday opera...

The Z4 was arguably the world's first commercial digital computer. It was designed, and manufactured by early computer scientist Konrad Zuse's company Zuse Apparatebau, for an order placed by Henschel & Son, in 1942; though only partially assembled, and not delivered by the defeat of Nazi Germany, in 1945. The Z4 was Zuse's final target for the Z3 design. Like the earlier Z2, it comprised a combination of mechanical memory and electromechanical logic, so was not a true electronic comp The Z4 wa... 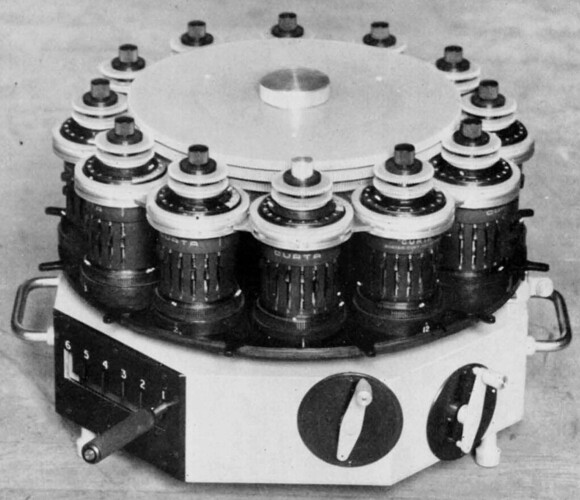 Feast your eyes on this 1953 creation, a 12-way Curta for matrix multiplication, built by the Department of Chemistry at the University of Birmingham: (Picture and story from Computer Resurrection Issue 79 in A Multiple Curta by Herbert Bruderer)...

Part 2: Parallelism in the serial age

Serial storage - the first and only storage, storage being a difficult practical problem. We might wonder why RAM is called random access, and it’s because there’s no constraint on which addresses can be accesses in sequence. With serial storage, you have to wait for the location of interest to pass by. The placement of data affects the latency and therefore the performance.

Turing suggested gin could be used for computer memory, although mercury was the eventual winner. Piezo crystals send soundwaves down a tube of mercury, and the pulse train is picked up and reconstitued at the far end. EDSAC, coffin, mercury 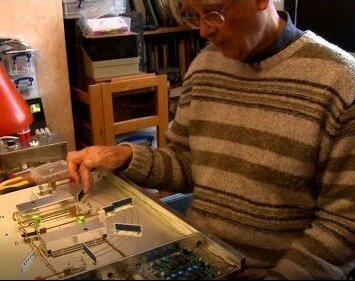 Delay line storage in EDSAC - pick your poison — The National Museum of...

EDSAC depended upon delay lines for main store and internal registers. This originally used mercury but due to cost and safety considerations, nickel delay lines will be used instead. Professor Peter Linington explains how he researched the...

1940s Alan Turing, a clear writer and communicator:
“The full storage capacity of the ACE available on Mercury delay lines will be about 200,000 binary digits. This is probably comparable with the memory capacity of a minnow.”
From a Lecture to the London Mathematical Society on 20 February 1947 (14 page PDF, well worth a read!)

1950s The drum machines, the story of Mel, instruction sets with goto on every instruction, to allow for “optimal programming”, which assumes programmers are cheap compared to run time.

Drum spins up to 3600rpm, the drum rotation determines the tempo of all parts of the machine:

Note the front panel is literally a small oscilloscope: tracing signals over time is the same thing as seeing all the bits in a word.

1950s The Booths with their parallel multiplier - it was thought it couldn’t be done. Kathleen Booth the programmer and Andrew Booth the hardware engineer. Even today, most multipliers inherit from this invention, and multiplication is no longer very very much slower than addition.

“the APEX, an all-purpose electronic X-ray calculator, which had significantly higher precision of 32 bits, and a 1-kiloword magnetic drum. Booth claimed that the major accomplishment of the APEX was the implementation of a non-restoring binary multiplication circuit which von Neumann had claimed to be impossible claimed” 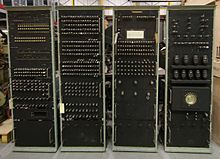 The APE(X)C, or All Purpose Electronic (X) Computer series was designed by Andrew Donald Booth at Birkbeck College, London in the early 1950s. His work on the APE(X)C series was sponsored by the British Rayon Research Association. Although the naming conventions are slightly unclear, it seems the first model belonged to the BRRA. According to Booth, the X stood for X-company. One of the series was also known as the APE(X)C or All Purpose Electronic X-Ray Computer and was sited at Birkbeck. Fr...

1960s The Elliott 803 is bit-serial but has a wide word and fits two instructions in a word. So that can be viewed as the beginnings of modern machines which fetch and decode whole cache-lines worth of instructions. 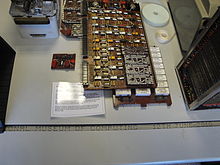 I forgot to mention core memory! This was cheap, reliable, manufacturable, and easy to stack several planes to make a word-addressed memory. The end of bit-serial for main memory - but we still have bit-serial disks, and communications.

1960s DEC’s bit-serial PDP-8/S as cost reduction (quarter the price of the original, but rather slow.) A slow computer you can afford - is that better than a fast one which you can’t?

The total sales figure for the PDP-8 family has been estimated at over 300,000 machines. The following models were manufactured:

1970s Ferranti F100-L microprocessor with parallel memory, serial ALU - 16 bit machine, limited chip size. Could only afford enough transistors to make a serial ALU, but as it was clocked much faster than the external (conventional, parallel) memory, there wasn’t too much of a performance hit.

Part 3: parallelism in the modern age 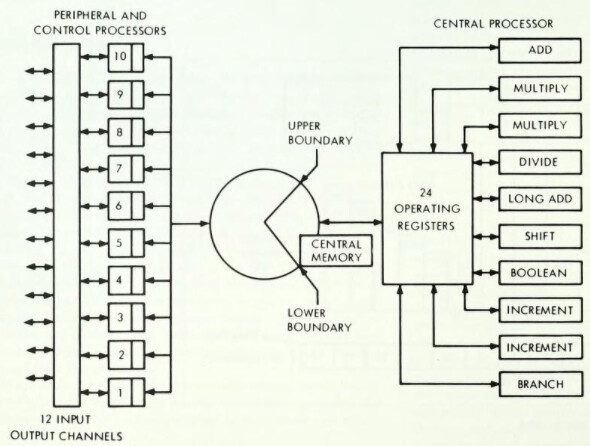 Cray and CDC and memory interleaving… see here for example 1988 Cray XMP or here for the 1976 Cray-1:

Just a quick nod to the excellent 1953 book which surveys computing of the day, and the symposium which gave rise to it:
Faster than Thought: A Symposium on Computing Machines

Jim Austin is a very friendly and enthusiastic professor of computer science who keeps 3 or maybe 4 large sheds full of equipment, some it in working order. I went there, with Udo, by arrangement. Here are some photos of particular relevance to this topic:
Transputers, Parallel Computers and Supercomputers (Jim Austin Collection)
which is to say, particularly of transputers (early 1980s), Crays (1971 onwards), the Encore Multimax (1985)

The Multimax was Udo’s special interest - it’s a fast bus on a backplane with multiple memory boards and multiple (30MHz, 32 bit) CPU boards. He’s got a web page on the machine - see caption “Fig. 7. Ed and I in the middle of nowhere: Has anybody seen a Multimax?” 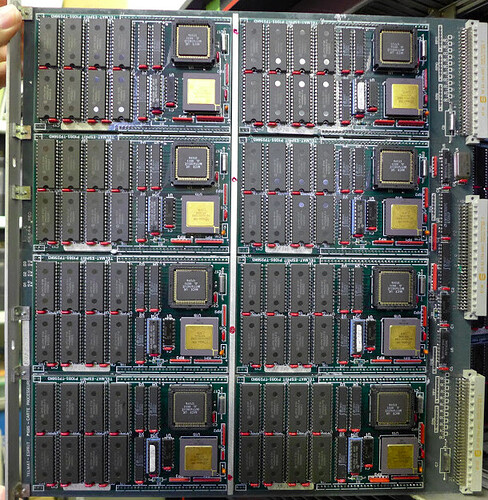 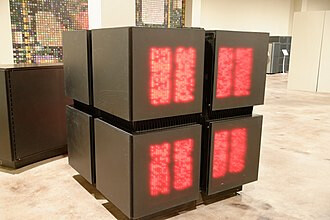 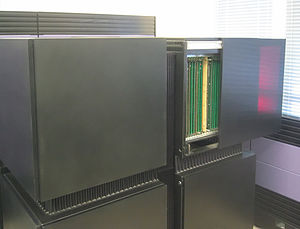 A Connection Machine (CM) is a member of a series of massively parallel supercomputers that grew out of doctoral research on alternatives to the traditional von Neumann architecture of computers by Danny Hillis at Massachusetts Institute of Technology (MIT) in the early 1980s. Starting with CM-1, the machines were intended originally for applications in artificial intelligence (AI) and symbolic processing, but later versions found greater success in the field of computational science. Danny Hill...

1980s when it comes to coprocessors, we must mention Acorn’s BBC Micro, architected from the start as a front end machine, sporting a 2MHz 8-bit 6502, but allowing for an application processor: 3MHz 6502, 6MHz Z80, xMHz 32-bit ns32k, xMHz ARM when that appeared. Briefly sold a scientific workstation called the ABC: rather good value for money running Fortran for example. 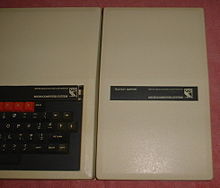 A BBC Micro expansion unit, for the BBC Micro is one of a number of peripherals in a box with the same profile and styling as the main computer. The second processors are connected to Acorn's proprietary and trademarked Tube interface. Only one second processor unit could be connected at a time to a BBC Micro, although a Master 128 could also have a co-processor fitted internally at the same time. The terminology of second processor was slightly misleading, since connected and switched on, the s... 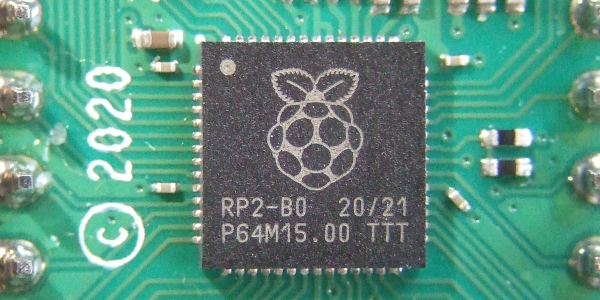 A Look At The Interesting RP2040 Peripheral, Those PIOs

The Raspberry Pi Pico is the latest product in the Raspberry Pi range, and it marks a departure from their previous small Linux-capable boards. The little microcontroller board will surely do well …

I’ve just found this which takes a similar line to mine above:
Why Some Old Computers are Interesting