The UK is short of ventilators. The government is asking engineering companies to stop making cars and toasters and switch to ventilators. I have found two hackshop designs for DIY ventilators. 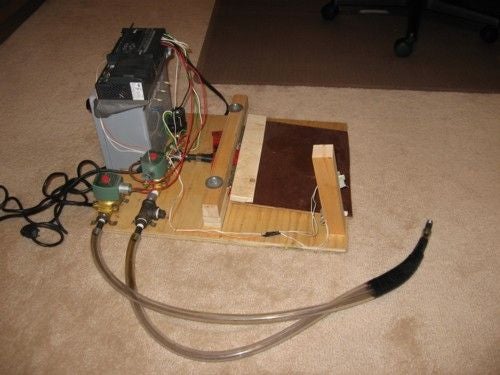 The Pandemic Ventilator: Assembly instructions for a DIY Ventilator prototype.This could be useful in an Avian Flu pandemic.Constructed with commonly available components.Many of us modify, hack, re-purpose, and DIY to save money, build something... 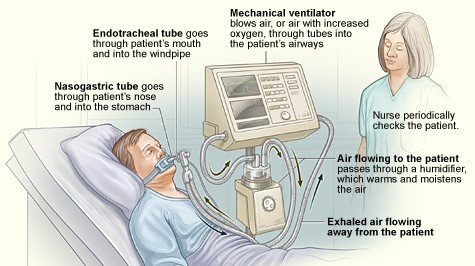 Ultimate Medical Hackathon: How Fast Can We Design And Deploy An Open Source...

[Gui Cavalcanti], whose name you might recognize from MegaBots, got on a call with a medical professional in San Francisco and talked about respirators. The question being, can we design and deploy…


This may look desperate, but just because they are made of plywood and whoopee cushions does not mean they should be overlooked. Does anyone know of a hackshop in the Somerset area which may be working on this?
I have a load of components (pumps, cpntrols, connectors etc.) which may be of use. They come from the Welshmill which made medical equipment and I suspect that this included ventilators. If you know of anyone working on this please let me know. Thanks. PJ
Ed_S 16 March 2020 09:21 #2

Maybe worth checking over the border too: Gordon Endersby of the Trowbridge shed.

I know not of this tribe… have you contact details?

Boosting oxygen percentage seems likely to be a helpful thing to do?
How about rigging up a pressure swing absorption concentrator? https://en.wikipedia.org/wiki/Oxygen_concentrator It uses Zeolite, which I think is a component of cat litter. Maybe some sort of contraption using bellows? Even just manually operated via a handle. It may require a team of volunteers. The grand kids could do it in shifts? To keep granny alive. The schools are likely to close soon anyway, and the youngsters are less affected by the virus.

I have ordered Zeolite powder and granules via Ebay. It is used for fish tanks. If we could come up with a scheme that uses commonly available items, such as tin cans, plastic bottles, sticky tape etc, then pretty much anyone could make it. Not sure if this will work. Had a look also for Oxygen meters but the commonly available ones only measure up to 30%.

Around 12% of people with it will need supplemental oxygen. These videos are informative: https://www.youtube.com/watch?v=EuWo5lmWuZI Be sure to take plenty of vitamin D. And if you get it, it is best to have a fever rather than using anti-inflammatory drugs such as aspirin, ibuprophen etc. According to this chap (Disclaimer: I am not a medic - ask your doctor).

We are working on medical devices, such as open source ventilators, to have a fast and easy solution that can be reproduced and assembled locally worldwide.

If you have any skills that you consider might help, join the Helpful Engineering group: link to slack channel

Ed, thanks for this link. 8 kg of Zeolite granules have arrived. Of course I had to disinfect the box and the packets. Now need to work out how to cobble something together. I have a collection of empty tin cans and plastic bottles! All suggestions gratefully received.

I’m really interested in helping create these… has anyone managed to put one together yet?

Ian,
I am in the process of getting my head around the problem. I am trying to make an oxygen concentrator:

An oxygen concentrator is a device that concentrates the oxygen from a gas supply (typically ambient air) by selectively removing nitrogen to supply an oxygen-enriched product gas stream. Two methods in common use are pressure swing adsorption and membrane gas separation. Home medical oxygen concentrators were invented in the early 1970s, with the manufacturing output of these devices increasing in the late 1970s. Union Carbide Corporation (U CC) and Bendix Corporation were both early manufactu...


Pedantically, a ventilator is a different thing - although I think that they do or can use enhanced oxygen.
Initial thoughts is that it does not need to be as complicated as the conventional pressure swing adsorption oxygen concentrator. Usually they have two cylindrical containers of Zeolite. Can I make it work satisfactorily with just one Zeolite container? And thereby simplify the task? The reason that two containers are used is so that the oxygen flow is then continuous. But anyway the oxygen needs to have moisture added, which implies an additional reservoir with say water and a sponge inside. Which would naturally smooth out the flow anyway.
I do not have very many materials available:
Will 19 March 2020 11:58 #13

Does it need an exhaust stroke for the nitrogen-rich part?
Excluding the humidifier part, it feels almost like the cycle of a 4-stroke engine (hopefully without the combustion part)

Part of my thinking was: are there any existing parts (with useful valve-timing mechanisms) you could use from piston pumps/engines? (combustion, steam, water)

If there was compressed air involved at the intake, the cycle might need changing, not sure…

It is necessary to increase the pressure of air around the Zeolite to about 2.5 times atmospheric.

Will,
I was wondering about re-purposing the lawnmower engine. But it is a 2 stroke not a 4 stroke, so I am struggling to see how that would work.
I am still struggling with the expelling of the nitrogen phase, in a simple as possible way to implement.
At the moment I have in mind to use a spring loaded valve for delivering the oxygen, which would be set to start opening at (say) 2 atmospheres pressure, but slightly constricted so that the full stroke would take the pressure up to 2.5 atmospheres.
Then pause for several seconds to allow the adsorption process, and for more oxygen to flow through the valve.
Then release the pressure through another valve, thus taking away the nitrogen.
Then move the piston “down” stroke (it may not be oriented downwards). To draw in fresh air.
The thing I am struggling with is how to co-ordinate this other valve (or valves).
The simplest implementation would be just to have a hole in the end of the Zeolite container, and put your thumb over it. It would take a bit of co-ordinating with pushing and pulling the piston, but you would soon get the hang of it.
I may just do this, at least initially to prove the process. Then think about valves with pushrods etc later.

I am fully occupied with Frome FM contingency arrangements at the moment, but have some parts which may help. I have to go now, but will be back later and can describe the components in more detail if you think they may be useful. Meanwhile here are some of the candidates. I also have a load of electronic components including power transistors, diodes and ICs. Uploading: IMG_7942.JPG…

Ah ok, so in the commercial devices, it sounds like the cycle (simplified a bit) is driven by compressed air alone, no piston:

Yes, I agree, that’s probably as bare-bones as we get - & it would amake for simple operation if the outlet valve could trigger by pressure level & exhaust triggered by return action of the outlet valve, with continuous inflow.

The valve layout might be more like this though (albeit the diagram doesn’t show exhaust!):
https://www.oxygenconcentratorstore.com/reference-material/how-concentrators-work
upload://iNpuhY6chBzEt6k1a6IV5Q9EgUG.gif

This one has the exhaust shown: 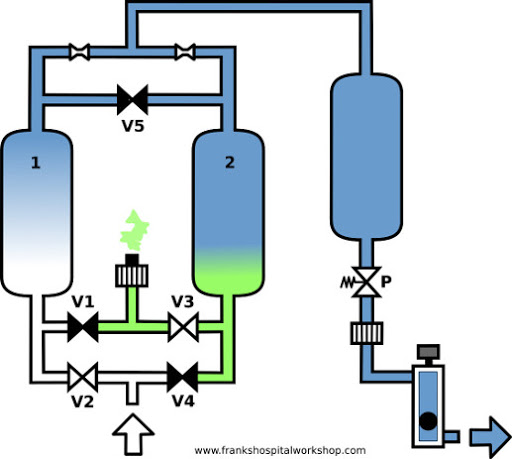 Thanks.
This is the clearest explanation that I have so far seen:
http://www.frankshospitalworkshop.com/equipment/oxygen_concentrators_equipment.html
I think I have spent enough time now reading about it. Need to just have a go.
Interesting that this description quotes a pressure of 1.4 to 2 bar (20 - 30 psi). This is lower than I read elsewhere. Hopefully this lower pressure is correct - it will make it more achievable.
I may have a go at making a pump from a cylindrical shampoo bottle. Or use a bicycle pump. I do also have an electric tyre inflator.
For the Zeolite container I will either use one tin can or two back to back. I have some cans which were the ring pull type and which conveniently leave a rigid rim at the open end. The tin opener that I have cuts from the side and so leaves a floppy opening, and also a metal disk. I can solder the metal disk from one can onto the rigid rim of a ring pull can. Having initially punched holes and soldered on any connecting tubes etc.
Any comments please?

The YouTube links have given me a much better idea of what you are after doing. I have a very general workshop and can do things to metal (cut it, drill it, and join it). I can’t guarantee that I can do all that is necessary, but am willing to give it a go. I am also about to carry on looking through the boxes of assorted mechanical stuff I have and will sort out components which look promising. Will let you know what turns up…