On Wednesday 11th we saw some promising progress on the air sensor (we seem to have one duff unit and one working one, which has caused a bit of head-scratching.) Danny took a short video and you can see the sensor prototype in action on our Facebook page.

There was also progress made on the 3D printing of chair leg stoppers, although a bit of an accident during the tidy up means the printer may need some attention.

We also had some useful chat about early opening, about holding an open day perhaps in the spring, and about @p.j and @danny_hearn’s imminent appearance on Frome FM.

Turnout was medium size with no new visitors - which we put down to pre-Christmas frenzies keeping everyone too busy.

(See some earlier reports at Wednesday report: a bit of a backlog and this search.)

Nice one and thanks.

On Wednesday 18th we had more fun and games with the air sensors: Will brought in a dedicated tester with its own display, and it shows that both our sensors are working. It must be that our inability to connect one of the two to the network was something about the wifi module.

We had a Raspberry Pi set up to act as a server for the sensors to report to over Wifi, and also as a server for browsers to connect to to pick up readings, results and statistics. We got a little sidetracked trying to figure out the configuration of the Pi and connect to it, as it has no display. Eventually, having downloaded and installed the useful tools Putty, Nmap, Wireshark and RealVNC, we found we only needed to connect to raspberrypi.local… 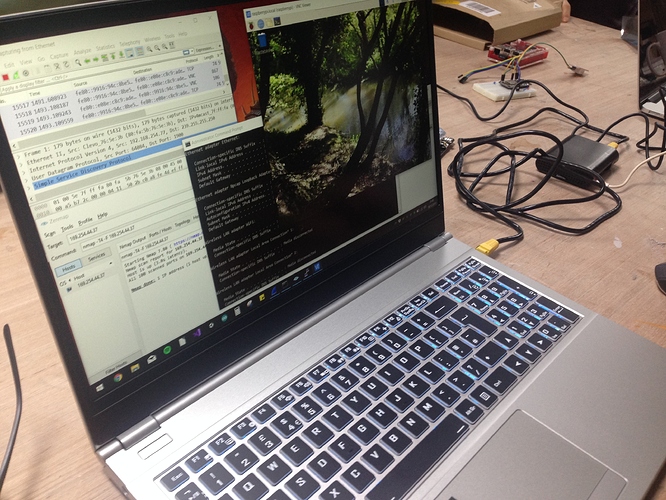 We had 7 attendees and two drop-ins, one of whom brought a mildly broken 3D printer, so we will see if we can get that fixed. We also inspected our own (recently donated) 3D printer which suffered damage last week, and decided it too looks repairable - a surface mount USB socket needs to be resoldered and probably replaced too. 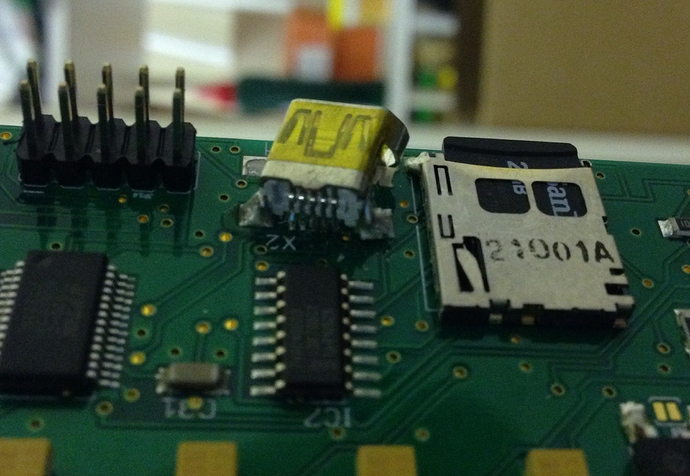 One of the huddles was trying to figure out our TechShed story in words and pictures so we can re-do our website to be a bit more targeted and to use the right language for each audience.

It was a good session overall, and we now take a two-week break, back on the 8th, most likely with a 6pm start as an experiment in running slightly longer sessions which are a bit more family-friendly.

Wednesday 15th was our second experimental early start. (We had 6 regulars and a new attendee. Apologies received from two regulars.)

We saw a bit of progress with some simple sketches for wireless displays: @Will has a new idea to develop simple ideas between time and then use them as demos and tutorials during sessions.

The fixed-up 3D printer was in play, and very nearly working.

As for myself, I spent too long trying to get an old tablet and an old phone working so I could deploy a mini-mesh network - which worked, and we got stable wifi for the first time: 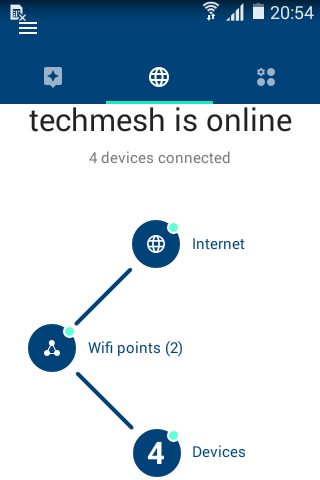 But on reflection, a long ethernet cable into the room and a local access point is probably more appropriate technology - I’ve got loads of old APs and @Will has a cable. All the mesh was doing, in effect, was bridging a 2m gap because the long cable I brought wasn’t nearly long enough. (I still think mesh is great, but best applied to the whole space, not just for a short gap around a corner.) (Another thing that works well for me is powerline networking but I don’t have any spare gear for that. We’d have to try it to see how well it works at the Hub.)

3 posts were split to a new topic: Mesh networking (for Welshmill)

The 3D printer huddle went off to a cave to do some intensive huddling and came back with a newly assembled printer.

The Air Quality server huddle successfully brought up a Raspberry Pi acting as a server, to collect reports over Wifi and serve out data.

The WiFi huddle successfully installed Wifi in the Remakery, for the benefit of all users of the space.

The Air Quality Kits huddle worked towards buying several kits of parts so we can hold a kit-building event fairly soon.

The programming huddle did a bit of helping out with Visual Basic and a bit of chatting about Basic, Fortran, and Cobol. These being the main programming languages surviving since the 1960s. I’ll admit I might have led the conversation towards computer history.

There was a bit of an Arduino Activities huddle too - I saw some coloured LEDs doing things.

Overall a very good vibe to the session! No pictures from me this time.

Nice to hear the projects are tootling along nicely, (especially without my input) thanks for the update Ed

We had a really positive and energetic session on Wednesday (2020-01-29) which was once again an experimental early start. Ten people I think - unless I missed someone! Some introductions were in order as not everyone had already met.

As Will was away, three or four of us tried to follow the instructions to bring up our local Pi-based data collection server, with only partial success. But we felt we’d learnt something, and no doubt the exercise will help us improve the documentation. We did get an air quality sensor working, on the LAN, taking measurements, and it was contacting the server, but was not succeeding in getting the database updated.

Paul brought in a nicely aged Amstrad PC, with two floppy disk drives for different disk sizes: the later hard shell 3½ inch and the earlier actually-floppy 5¼ inch. This is a machine he uses to rescue or copy older floppies that people discover, but it has developed a hardware fault. We might look at this in a later session. (This model of PC dates from 1986. But still not the oldest computer we’ve had at a session!)

Danny posted a video which shows an experiment with Arduino and a couple of infrared proximity sensors:

There was certainly some activity with the two in-service 3D printers (not both ours) but I’m not sure what. I did accidentally unplug one of them but it turned out to be idle at the time.

Danny has been buying some bits, as we gain experience in what’s needed, and so there was a bit of plugging things together to make sure everything works as it should: we got a new HDMI screen for a Pi, so we have a cheap and cheerful computer setup if we need one. There are still some odds and ends to be bought.

Hi all, it’s George here! Looking forward to getting our set up sorted on Wednesday.

Any photos from yesterday? (I missed it…)

See working prototype of air sensor. The team managed to hook it up to data logger. So this should give us a weeks worth of reading by next session. 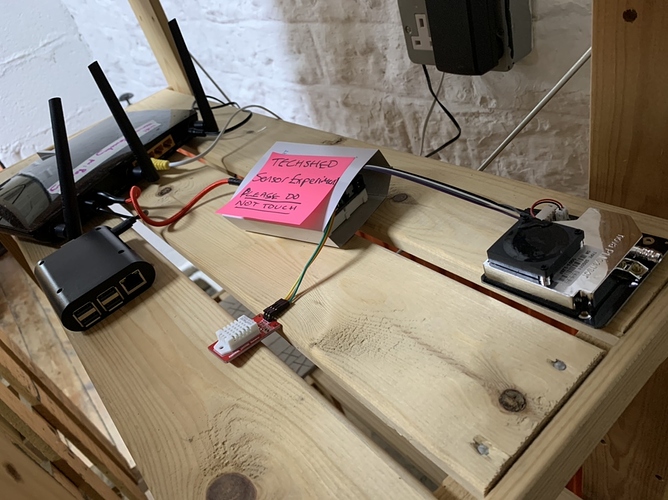 I turned up on Wednesday 26th having been away for a couple of weeks. Had my Spectrum Next to show (but not to demonstrate) and swapped that experience with the homebrew Theremin/Laser Harp which is neither of those things, but is the rudiments of a musical instrument, being Arduino-powered and descended from the experiments last seen with a pair of infrared distance sensors.

And we saw a progression of 3D printed inserts for a weatherproof enclosure which can house the Air Sensor parts - an alternative to the plumbing-supplies solution we know of. 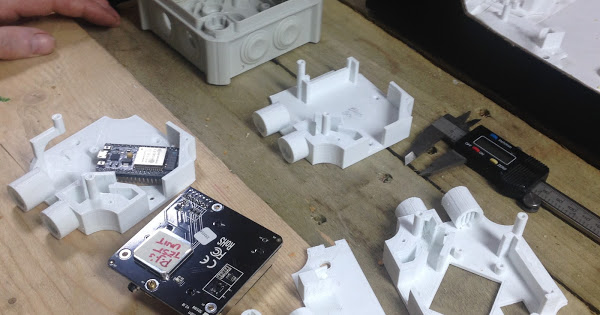 In the meantime there’s been a Sunday event - see this report from Danny:

Thank you to everyone that came yesterday. We had Will, Liam, Myself, Pj and george, with Lisa and her boy popping in at the end. It was a good atmosphere with all of us appreciating the extra time to dig in, as well as have a bit of banter and chat without running out of time so quickly! We even had lunch together (PJ showing off some quite incredibly large strawberries with his lunch!). Oh and we tried music too, which I think went down ok… For next time Optional cooked lunch (with Mahe…

Thanks for the updates chaps. By the way, I may not be with you physically. However, rest assured, my ‘force’ is with you spiritually…

Just to note that we’ve held two Wednesday sessions remotely. We tried two different approaches: Twitch the first time, and Zoom the second time. Expect to see some kind of writeup about the process. In both cases we had just 4 or 5 attendees - we’ll try to publicise better next week, but most likely it will be Wednesday at 7 as usual. Keep an eye on the forum!

We just had our third remote Wednesday session! Rather than innovate, we stuck with Zoom for now. Mainly we caught up with how we are and the new living conditions. Danny talked us through some very interesting work he’d done, to provide an absolutely minimal database for volunteer coordination: Google Form for the data entry, Google Sheets to hold the data, Saved Filters to publish selected views, and a Google Slide published to the web as the interface to the care providers. Brilliant! Will started to describe a somewhat more scalable approach using Firebase, but we ran out of time.

(aside from my feeling of aaaaahhhrrrgghh why I’m I finding a bunch on new stuff - https://fireship.io/lessons/)

Just playing about with Firebase - this is my instance of their hello-world hosted page, with nothing wired in from the database yet, but authentication etc. ready to use:
https://test-cf288.web.app/

I changed some stuff, so I’ve moved it over to Playing with Fire[base] & Svelte

Just a quick report on last night’s video get-together. We had six attendees, three of them for only part of the session, which probably ran for about 90 mins. For me, that was absolutely fine: it felt like an informal get-together with people dropping in and out according to their interest and availability. We kept in touch with other, and we shared some updates on progress with things we were doing (including some volunteering, community help, and anti-virus help.) We also shared some links, and spawned a few updates on the forum. I’d be happy to do the same again next week, to see more people, or about the same number, or to see any kind of show-and-tell if anyone has something like that to offer.

Another quick Wednesday get-together on Zoom - five attendees, and we chatted about 3D printing (for art, for healthcare, and as a possible Share offering); about making up and installing two or three air sensors in the town centre while traffic is really quiet and the air is presumably unusually clean; and about AI, Machine Learning, and Artificial Life. (See here for some links)

Hey folks,
We had an email from the town council who would like us to setup 6 air sensors with a website to extol the virtues of our cleaner air. They’d like us to hash together a proposal.

E.g
What do we need?
How long will it take
What are dependencies
What is vision

Please join tonight if you fancy shaping this!

Just a quick summary of this week’s video meetup: just five of us this time, we had a quick check-in and catch-up on what we’d been up to, and then spent a chunk of time on the air sensor project - we have now put in a proposal, it’s with Anna at the Town Council, and hopefully we’ll hear back before too long.